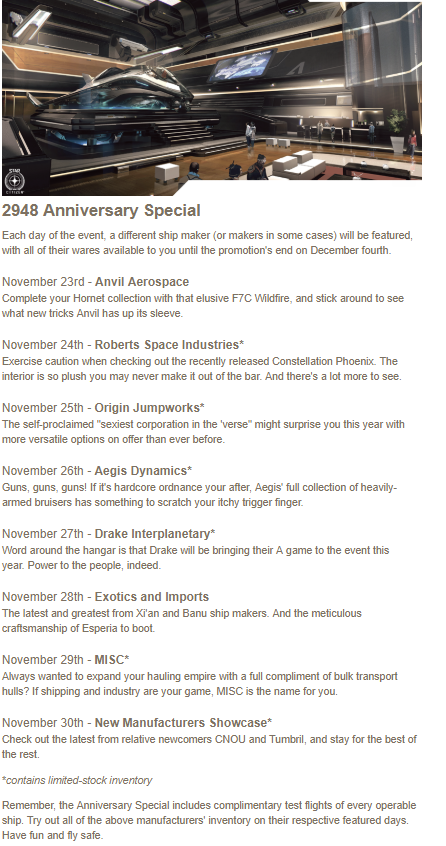 
NAVIGATING TO THE LORVILLE CONVENTION CENTER

For the 2018 Anniversary Free Fly event, we have created a special Convention Center where players can get a first-hand look at the ships offered for the day. Not only is the Convention Center where you can peruse the featured ships on any given day, it’s also where you rent them for a test-flight.
To help everyone get to Hurston, all players will be granted access to a Cutlass Black to fly for the duration of the event.
Below is a step-by-step guide on how to retrieve your ship, navigate to the city of Lorville and visit the Lorville Convention Center
RETRIEVING YOUR SHIP
When you wake up in Port Olisar in the player hab, exit your room and head downstairs to the main hub. Surrounding the center of the room are ASOP Terminals, and these allow players to retrieve their ships.

Approach a terminal and interact with it by holding F, then selecting Retrieve next to your ship of choice. For the 2018 Anniversary Free Fly event, all players will have access to a Cutlass Black which should appear in this terminal. You will be prompted with the landing pad that your ship has been assigned to. Around Port Olisar you will see signs to direct players to the appropriate landing pad.

Approaching your ship from the rear, hold F and select Open Door (The entry point is different per ship, depending on its size and number of entry points). Once inside, turn around and close the door by holding F and clicking the Close Door prompt.

The Cutlass Black has two seats: One at the front for the Pilot, and one behind the Pilot's seat for the Co-Pilot. Jump into the front seat by holding F whilst looking at the seat, then select Enter Flight Seat.
Cockpits have various functionalities, ranging from opening and closing the exterior ramps and doors, locking the ship and powering the ship up or down. Functional buttons are highlighted orange.
The quickest method to get into space is to hold F, then select Flight Ready. This will power up the ship and start the engines ready for flight. Press strafe up (default: space bar) to lift your ship from the pad and press N to switch flight modes from Precision (Landing) to Flight (SCM).

NAVIGATING TO HURSTON
The MobiGlas is your companion along your journey. Worn on your left wrist, this provides information on your current physical condition, allows you to change the load-out of your character and ships, navigate the stars using the Star Map, among many other things. We will be using the Star Map app within your MobiGlas to set a navigation point to Hurston, the planet that Lorville resides on.
Open the mobiGlas with the F1 button, and view the Star Map. Double right click to zoom all the way out to get the best view of the system. Select Hurston, then select Set Route. If done successfully, you will see your current fuel level, and the required fuel level to make the journey, displayed in the top left corner of your screen. Once done, close the MobiGlas by pressing F1.

Upon exiting the MobiGlas you will now see there is a marker in your field of view labelled Hurston. Point your ship at the marker and when centered, the ship will begin to calibrate your jump. Press B once to begin spooling your Quantum Drive, and you will see the percentage calibrated on the left increasing, along with the percentage spooled increasing at the top. When both have completed, Press and hold Bto enter Quantum Travel.

Arriving at Hurston, you will be greeted by the epic sight of the planet looming in your cockpit window. When Quantum Travelling between locations, your Quantum Drive takes a few seconds to cool down, ready for another jump. Press B to bring up location markers, and maneuver your ship to find Lorville. Its location will depend on where you have quantum traveled from, and the planets rotation at the time. Much like before, point your ship at the marker and when centered, the ship will begin to calibrate your jump. Press B once to begin spooling your Quantum Drive, and you will see the percentage calibrated on the left increasing, along with the percentage spooled increasing at the top. When both have completed, Press and hold B to enter Quantum Travel.

Approaching the city of Lorville you will see a flash of orange surrounding the city. This is the No Fly Zone where ships are not allowed to enter. Attempting to enter the No Fly Zone areas will result in the destruction of your ship, however the image below perfectly captures the area in the center of the City where the hangars are located.

Before landing we will need to request authorization to land, and a landing pad will be assigned within a hangar. To request authorization, first you must be within 8000 meters of the hangars, located at the base of the large building at the center of the city (A good indication of this is arriving directly above the hangars and checking your altitude, located to the left of the HUD in your cockpit and next to your flight speed).
If you are within 8000 meters, bring up your MobiGlas by pressing F1, select the CommLink app on the far left of your apps list. Select Contacts, then select the icon next to Lorville Landing Services. The friendly Landing Control representative will assign you a landing pad, or if they are full you will be put into a queue.

Activate precision mode by pressing N. This will lower your landing gear and decrease your speed to that appropriate for landing your ship.
When the landing pad is assigned, you will see an arrow pointing down upon the hangar that you have been allocated, along with the hangar bay doors opening. Maneuver your ship vertically above the hangar bay doors, making sure not to enter into the no fly zone, and then use strafe down (Default: Ctrl) to land within the hangar.

Exiting the elevator, players are greeted with signs directing them to the Convention Center, which is round the corner and to the left of the elevators we have just exited.

Congratulations - you have arrived at the Intergalactic Aerospace Expo 2948! What exciting things lay behind these closed doors? Check out the 2018 Anniversary Free Fly event guide for more information!